Verona, october 7-8 2016 - At its third edition, Intimissimi on Ice has drawn inspiration from the success of past three editions of “Opera on Ice”, one of the most beautiful shows on ice designed and produced by Giulia Mancini with the company Opera on Ice.

Set between reality and dream, the show recounts a fantastic 24-hour journey of the two stars Bel (Kiira Korpi) and Hero (Stéphane Lambiel) in a dance that takes us from the first light of dawn to a romantic sunset: an amazing, enchanting, exciting day in the exclusive setting of Verona’s ancient city walls.

Big news in the 2016 Cast Ice: Evgeni Plushenko, two-time Olympic champion, two-time Olympic silver medalist and only skater in the world who is a four-time Olympic medalist, the Tsar of the Ice who always captivates the audience with his magical performances.
Another new entry the beautiful and sweet Finnish skater Kiira Korpi, following five National championship victories, two European bronze medals and two appearances at the Olympics.
Undisputed protagonist of all six editions of the show in Arena since 2011, Stéphane Lambiel enchanted the audience and obtained for the third year in a row the standing ovation with “Nessun Dorma” sung by Andrea Bocelli.
Present in the 2016 show also Carolina Kostner and other international figure skating stars, such as Italian champions Nicole Della Monica e Matteo Guarise and the Italian synchronized skating team Hot Shivers.

A tribute to Italy, envied throughout the world, and the incredible voice of a legendary star. Andrea Bocelli performed live during the most unforgettable moments of the show. From 1996’s eternal “Con te Partirò” (Time to Say Goodbye), Bocelli has collected international awards and nominations for the Oscars and Golden Globes, including two Classic Brit Awards, plus a memorable standing ovation following his performance at the Metropolitan Opera House, New York.

Sandro Veronesi, Opera on Ice and BWS are once again producers and co-producers Intimissimi On Ice.
Giulia Mancini is the creator of the show original format “Opera on Ice” and with his company prides herself on its artistic stars from the world of ice skating. The company is committed to creating and presenting innovative shows by transforming dreams into reality.

THANK YOU TO THE AMAZING CAST OF INTIMISSIMI ON ICE 2016

With the support of
Comune di Verona – Sindaco Flavio Tosi 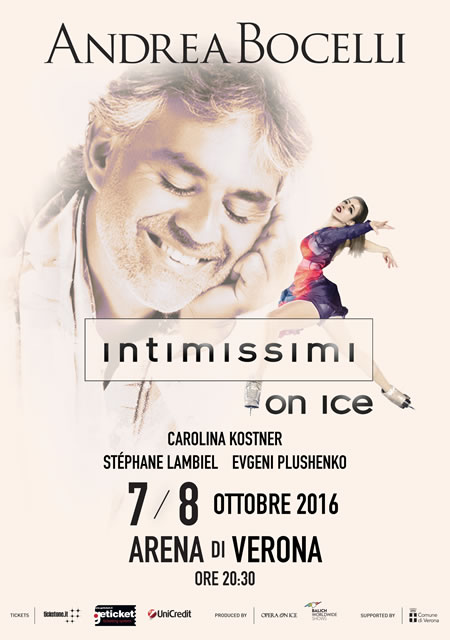