Verona, 8 ottobre 2017 - The company Opera on Ice, with the show "Intimissimi on Ice", brought to Arena di Verona for the seventh consecutive year the most famous ice skating champions in the world, for two sold out live shows with a record of audience from all over the world, even from Brazil.
With "A Legend of Beauty" the audience has been able to experience the most authentic experience of the classical arena concept thanks to a totally refurbished central stage with a 360° visibility.

Once again this year the company has succeeded in involving a top-level cast, all handled impeccably by Daniela Mancini with the help of Beatrice Dalle Rive.
For the first time in the history of the show in the Arena, all the main skaters were Olympic medallists: Japanese champion Shizuka Arakawa, the first Asian figure skater to have won gold at the Olympics (Turin 2006) and a world champion already by 2004; the American ice dancing couple Meryl Davis and Charlie White, incumbent Olympic champions and recipients of a silver and bronze Olympic medals; and the Canadian pair-skating duo Meagan Duhamel and Eric Radford, Olympic silver medallists in the team event in 2014.
The cast wouldn’t be complete without the king of spins Stéphane Lambiel, silver medallist at Turin 2006, two-time gold and two-time bronze world championship winner; and Russian tsar Evgeni Plushenko, two-time Olympic gold medallist, two-time silver medallist, and the only figure skater in the world to have won four Olympic medals. Other stars from the international figure skating scene completed the line-up, including the Italian synchronised skating team Hot Shivers.
With them, one of the greatest talent of pop and opera, Maestro Andrea Bocelli.

This year’s theme has been Greek mythology reinterpreted with a modern twist: Venus and Helen of Troy, Circe and Medusa, the most famous women from classical myths are the protagonists of the same love and tragedy that colour contemporary women’s lives and for the occasion they were dressed by costumes designed by Chiara Ferragni, the most famous fashion influencer in the world.
The direction was entrusted to Damiano Michieletto, one of the most interesting talents among the generation of theatre and lyric opera directors in their forties, while scenic design and staging have been completely revamped by Paolo Fantin, who already boasts a wide range of international experience in the world of opera and the most important theatres (from Genoa to Valencia, from Tokyo to Salzburg and Paris).

“When I created this unique format of ice show event in 2011, I would have never imagined it could become the most beautiful ice show in the world since the first edition!  Most of the credit goes to Arena di Verona, the biggest open-air lyrical theatre in the world, which is a real beauty amplifier!  The rest of the magic comes from the cast, composed of great Olympic and World ice skating champions that with their performances interpret the music and the beautiful pieces sung by Bocelli.  I think that this edition is one of the most beautiful and elegant thanks also to the beautiful set design by Paolo Fantin with the central ice rink and the direction by Damiano Michieletto.  I can say that my and all Opera on Ice team's dream to bring the ice and this wonderful format in Arena di Verona has come true and has been able to make the public from all over the world feel a big emotion by creating a perfect combination of ART-MUSIC-SPORT and FASHION thanks to Dott. Veronesi, President of Calzedonia Group.”
Giulia Mancini, Opera on Ice President

THANKS TO THE AMAZING INTIMISSIMI ON ICE 2017 CAST

Produced by Opera on Ice and BWS. 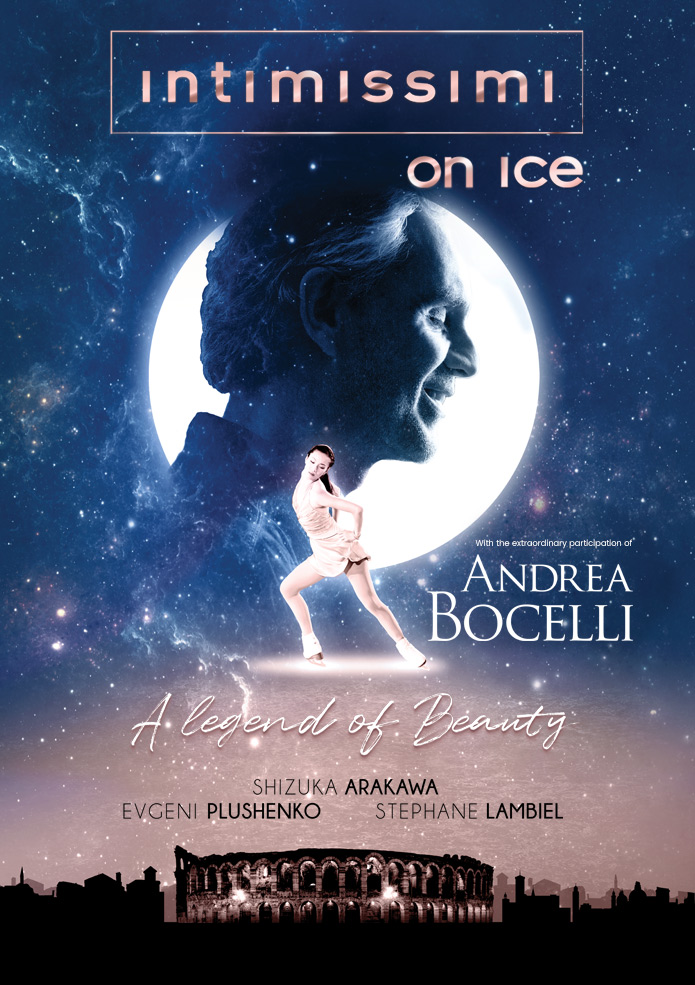