Growing emotions for the show staged in Piazza degli Scacchi.
Tsar Evgeni Plushenko and his five-year-old son win over the audience.
The tribute to Luciano Pavarotti.

Standing ovation for Tsar Evgeni Plushenko and a ten-minute final applause for the cast of “Opera on Ice”, successfully staged in Piazza degli Scacchi in Marostica. For the occasion the marble chessboard has been trasformed into a central ice rink of about 800 square metres: 35,000 liters of water used, the equivalent of about 1,600,000 ice cubes.

Two evenings of emotions and magic that have enchanted an audience of over 7,000 people with bated breath for the performances of world figure ice skating champions: from  Evgeni Plushenko, four Olympic medals, surprisingly on stage with his five-year-old son Aleksandr on “La donna è mobile” from Giuseppe Verdi’s Rigoletto, to the World Champion ice dance couple Anna Cappellini and Luca Lanotte; from the Spanish Olympic Champion Javier Fernandez who during his performance on “Carmen” involved the whole audience by making them waving white handkerchiefs in the classic pañolada as it usually happens in bullfights; to the leading Italian National pair Nicole Della Monica and Matteo Guarise; from the beautiful Russian Champion Anna Pogorilaya to the adagio couple Annette Dytrt and Yannick Bonheur and the Italian synchronized skating team Hot Shivers.

Among the unforgettable moments of the show, the tribute to Luciano Pavarotti, introduced by his wife Nicoletta Mantovani, and performed by Evgeni Plushenko, on the notes of “Nessun Dorma” taken from Puccini's Turandot.

Impeccable the excellent and beautiful soprano Elisa Balbo and the four singers of the Pavarotti Foundation: the soprano Claudia Sasso, the mezzo-soprano Eleonora Filipponi, the tenor Federico Veltri and the baritone Andrea Zaupa, accompanied by the Orchestra Ritmico Sinfonica Italiana and the choir Opera House directed by Maestro Diego Basso.
During the show also a touch of history, with the characters from the famous Human Chess Game.

“So much work and so much effort but the satisfaction, the joy, the magic and the atmosphere that the public of Marostica has sent us repay us of everything” comments Giulia Mancini, creator of the format “After seven consecutive editions and sold out of Opera on Ice in Arena, my partners and I are proud to have had the courage to bring our challenging format, a perfect combination of history, art, music and ice skating, in the beautiful Piazza degli Scacchi. The figure skating champions coming from all over the world have experienced the magic of performing under the stars in a historic location wearing made tailor-made costumes accompanied by choir, orchestra and excellent singers; for all of them, as for us, Opera on Ice in Marostica is a new dream come true.” She continues: "This dream was also realized by little Aleksandr (Tsar Evgeni Plushenko’s 5-year-old son) who unexpectedly performed very well with his father for the Italian public that overwhelmed him with applause. I am also pleased that through our show we will bring the beautiful town of Marostica in all Italian homes on Christmas afternoon, as happened with excellent audience in the past editions.” And she concludes: “Successfully achieved this new challenge, we are already working to bring Opera on Ice 2018 to other wonderful Italian historical locations.”

The original costumes are signed by the theatrical costume designer Lorena Marin, unique pieces of clothing also made with recycled fabrics supplied by the Hera Group for the Scart project, which uses only and exclusively industrial waste in order to positively promote the concept of recovery and reuse of materials, and embellished with Swarovski Crystals.
Lecturer at Verona Opera Academy of the course for costume designers, Lorena was supported in the realization of the costumes of this show by some of her best students.
Recently she has been costume designer for the Andrea Chenier production at Teatro del Silenzio with Andrea Bocelli; in October she will be costume designer in Tenerife for Italiana in Algiers and then she will curate the costumes for Un ballo in maschera at Teatro Regio in Parma.

Thanks to the collaboration with Anna Penazzo, makeup artist and bodypainter, twice Italian vice-champion in the “facepainting” category, for The Magic Flute and Carmina Burana the athletes' bodies were also painted. Two visions were born from listening to music: hard and cold for the “Queen of the night” by The Magic Flute by W. Mozart; energetic and explosive for “O Fortuna” by Carmina Burana.

Finally, the best Hair Stylist Mitù for Wella Professionals have studied and created the hairstyles of the cast.
Mitù is a national group of 300 salons, partners of Wella Professionals, which represent excellence in the hairdressing world in terms of image consultancy and salon service. Mitù style reflects the attention to detail, a thorough knowledge of the professional market and a distinctive and unique Italian style.

THANKS TO THE AMAZING 2018 OPERA ON ICE CAST

THE COMPANY OPERA ON ICE

In 2011 Giulia Mancini together with her partners and administrators Daniela Mancini, Danilo Mancini and Giuseppe Sorcinelli founded Opera on Ice, a company specialised in creating, organising and producing events on the ice, among which “Opera on Ice”.
Taking advantage of the professionalism and constant support of the collaborator Beatrice Dalle Rive and the production manager Paolo De Biasi, they have collected success over the years and sold out in all the shows they produce.
A successful and innovative format conceived by Giulia Mancini: the most famous figure skating champions, a majestic orchestra and choir and world famous opera singers performing live the most well-known arias in the most beautiful and evocative historical locations in Italy and the world.
Since 2011 Opera on Ice has been in movie theatres all around the world and brought an ice skating event to the cinema for the first time in history!
According to the international media and ISU (International Skating Union), “Opera on Ice” is the world’s most beautiful skating gala. All the editions went sold out and seduced the international live audience, becoming the most awaited Christmas show on the Italian TV channel Canale 5.
From 2014 to 2017 Opera on Ice co-produced - along with BWS - the specially-made format “Intimissimi on Ice” for Intimissimi. This format combined pop music and fashion with ice skating and opera.
The 2018 edition of “Opera on Ice” took place on the elegant and historical Piazza degli Scacchi in Marostica (Vicenza).
Opera on Ice is currently working at the creation and development of new ideas for innovative soon-to-be-staged galas: new visionary dreams will come true, as it happened with “Cinema on Ice” in 2016. 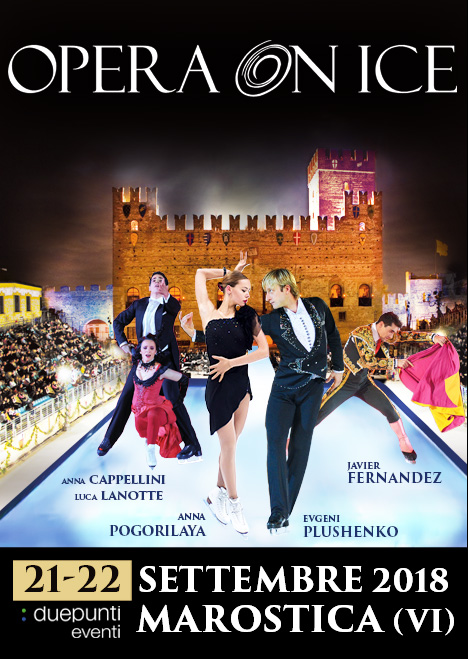