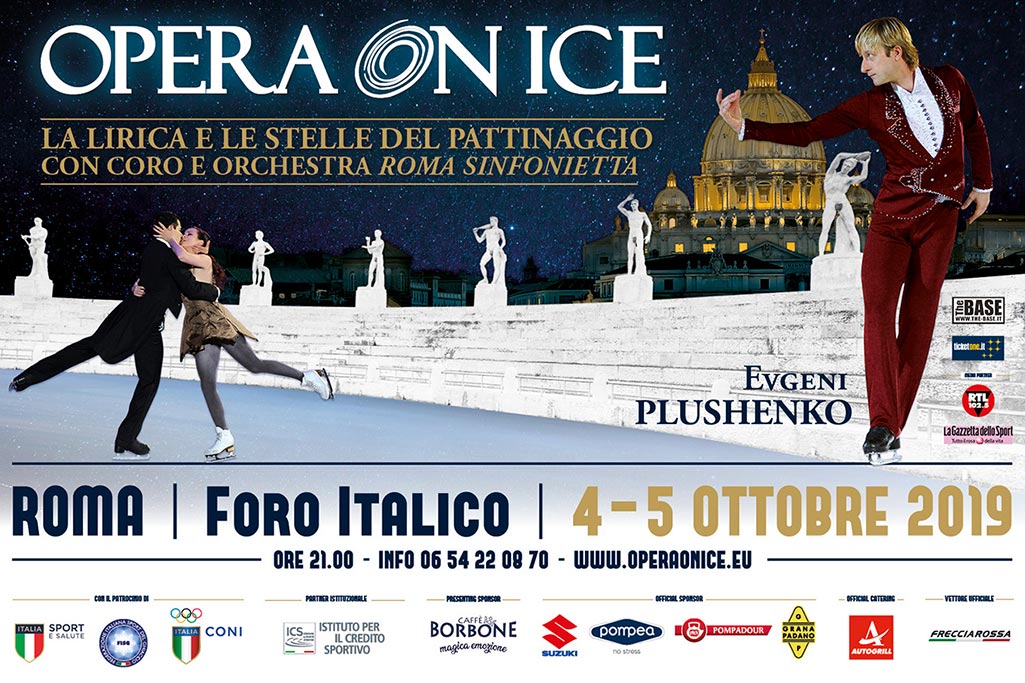 Standing ovation for Tsar Evgeni Plushenko and the entire cast in the closing number, “Nessun Dorma” from Turandot, interpreted by the great Maestro Luciano Pavarotti and tribute to the Olympics, in the world premiere of “Opera on Ice”, successfully staged in the temple of Italian sports: the Foro Italico in Rome. For the occasion, the famous tennis court was transformed into a central ice rink of about 800 square metres: 35.000 liters of water used, the equivalent of 1.600.000 ice cubes.

Two evenings of emotions and magic that enchanted the audience, left breathless from the performances of the greatest ice skating stars: from Evgeni Plushenko, four-time Olympic medalist, on stage with his six-year-old son Aleksandr in the aria “Votre Toast” from “Carmen”, who captivated all the audience waving white handkerchiefs in the classic pañolada that takes place in bullfights; from the ice dance couple, the World champions Anna Cappellini and Luca Lanotte, this year also as choreographers; from the top Italian pair Nicole Della Monica and Matteo Guarise, to the World champion and Japanese star Miki Ando; from the adagio pair Annette Dytrt and Yannick Bonheur to the Italian synchronized skating team Hot Shivers, without forgetting the young promises of Italian skating Lucrezia Beccari of IceLab (Bergamo) and Gabriele Frangipani of Young Goose Academy (Egna).

Among the unforgettable moments of the show, the kolossal opening on the notes of "Brindisi" from Traviata, where the whole cast were on the ice for a tribute to the great Maestro Franco Zeffirelli who recently passed away. President of the famous Sartoria Tirelli, Mr. Dino Trappetti, accepted the invitation to provide the precious historical costumes to celebrate and remember the great Maestro; these costumes were worn by the skaters in the opening number and in other pieces during the show. Everything was coordinated by theatrical costume designer Lorena Marin who has followed Opera on Ice since its first edition in 2011.

The best Hair Stylists for Wella Professionals studied and created the hairstyles of the cast, while Anna Penazzo, make up artist and bodypainter, painted the bodies of the Hot Shivers for the closing number, “Nessun Dorma” from Turandot, interpreted by the great Maestro Luciano Pavarotti, a tribute to the Olympics and the city of Rome.

“Luciano has always wanted to bring the opera to everyone and shows like Opera on Ice continue his journey and his will. Let me thank the organizers because since the first edition in 2011 they have wanted us by their side and it has been and is a great honor to be there.” says Nicoletta Mantovani, wife of Maestro Luciano Pavarotti and President of the Foundation who has always believed in the show format.

The show was even more magical thanks to TV presenter Alfonso Signorini, a great opera director and specialist, who believed in “Opera on Ice” since the first edition of 2011.

“This world premiere in Rome in the temple of sport represents a new great dream come true for the entire Opera on Ice team.” declares Giulia Mancini, creator of the format and President of Opera on Ice “Our next goal is to bring the “Made in Italy” format in the world. They have already requested it in China, Japan and the Arab countries. In Italy we think of a tour towards the Olympics, from Milan to Trieste, Naples and where we will be asked: we want to promote ice skating and see building stable rinks where many small talents can grow.”