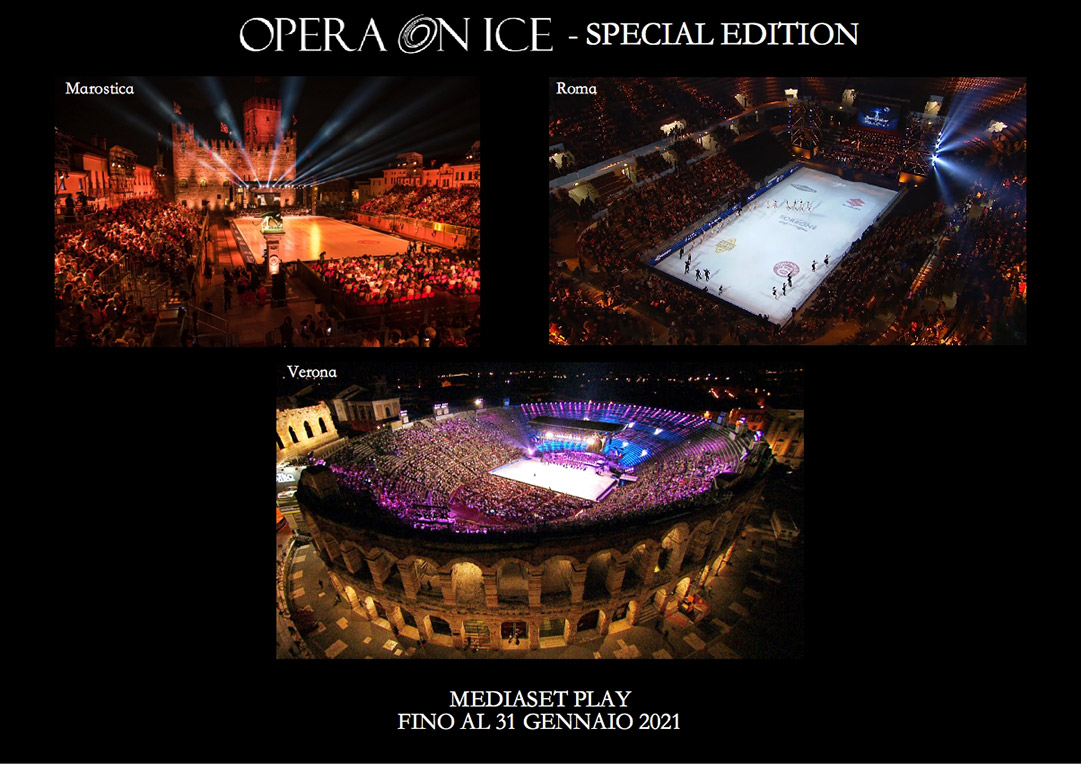 OPERA ON ICE - SPECIAL EDITION 2020
A MAGICAL EMOTION IN VERONA, MAROSTICA AND ROME

The most spectacular performances of the greatest ice skating champions accompanied by live choir, orchestra and singers
Sunday 27th December at 16:30 on Canale 5

Sunday 27th December at 16:30 on Canale 5 the special edition of “Opera on Ice 2020” will be broadcast: the world premiere of the only show in the world able to combine the magic of ice skating with the immortal opera arias in historic locations.

Due to COVID, the world of show business and ice skating has stopped, or rather... frozen.

This terrible virus, however, has not stopped Opera on Ice, the Made in Italy show that this year will be broadcast with a special edition where viewers will be thrilled with the most spectacular performances of the greatest ice skating champions in the fantastic historical locations that hosted the show over the years.

It starts from Arena di Verona, the largest open-air theatre in the world, always sold out with over 12,000 people in standing ovation, passing to the medieval village of Marostica in the historic Piazza degli Scacchi, where for more than a century every two years the historic game of chess has been played with living characters, that was transformed into an ice stage immersed in a unique setting, to finally arrive at the temple of sport: the Centrale of Foro Italico in Rome.

“I'm happy to participate in the best show in the world, because Italy has always had a special place in my heart." declares Evgeni Plushenko, the only athlete in the history of ice skating to have won four medals in four different Olympic Games “Let me thank Opera on Ice for always discovering fantastic historical locations for its ice shows. I'm sure that in this special edition we skaters will be able to excite and involve the public from home with our performances as never before.”

Captivating and moving the live interpretations of the most acclaimed voices of international opera and of the young emerging talents of the Pavarotti Foundation who, with its President Nicoletta Mantovani, immediately believed in the value of the format: “Luciano has always wanted to bring the opera to everyone and shows such as Opera on Ice continue his path and his will. Let me thank the organizers because since the first edition in 2011 they have wanted us close and for us it was and is a great honor to be there.”

It will also be possible to admire the precious historical costumes created by the theatrical costume designer Lorena Marin, who has always been alongside Opera on Ice.

The best hair stylists and make-up artists studied and created the hairstyles of the cast and with the collaboration of a bodypainter the bodies of the athletes were even painted.

“For me and for the whole Opera on Ice team it is an immense joy to be broadcast on Canale 5 for the tenth consecutive year with our ice show." declares Giulia Mancini, creator of the format and President of Opera on Ice "We are convinced that art, culture, sport and the beauty of opera will also help us overcome this terrible moment. For almost a year the entertainment sector has been on its knees, we sincerely hope to be able to start organizing the next edition of Opera on Ice 2021 as soon as possible.”

A gift from Canale 5 to its viewers during the Christmas holidays: a unique show, a mix of music, art and sport, which will make the atmosphere in Italian homes even more magical.

THE COMPANY OPERA ON ICE

After a twenty-year experience in the management of champions and major sports events, rst as International Vice President of IMG (International Management Group) and then, since 1999, as President of her own Company Mancini Group, in 2011 Giulia Mancini and her partners and administrators Daniela Mancini, Danilo Mancini and Giuseppe Sorcinelli founded Opera on Ice, a Company specialized in creating, organizing and producing events on the ice, among which “Opera on Ice”.

Thanks also to the professionalism and constant support of the collaborator Beatrice Dalle Rive and the production director Paolo De Biasi, they have collected success during the years as well as sold outs in all the shows they produced.

A successful and innovative format conceived by Giulia Mancini: the most famous gure skating champions, imposing live orchestra and choir, world famous opera singers performing live the most well-known arias from the operas in beautiful and evocative historical locations in Italy.

Since 2011 Opera on Ice has been in movie theatres all around the world and brought an ice skating event to the cinema for the rst time in history! According to the international media and ISU (International Skating Union), Opera on Ice is the world’s most beautiful skating gala. All editions went sold out and seduced international live audiences, becoming the most awaited Christmas show on the Italian TV channel Canale 5.

From 2014 to 2017 the Company Opera on Ice co-produced the format “Intimissimi on Ice” with BWS for Intimissimi, the ad hoc event that put together pop music and fashion with ice skating and opera.

The 2018 edition of “Opera on Ice” was staged in the historical and elegant Piazza degli Scacchi in Marostica, while the last edition was the world premiere at Foro Italico in Rome in 2019.

The Company Opera on Ice is currently working at the creation and development of new ideas for innovative soon-to-be staged galas: new visionary dreams will come true, as it happened with “Cinema on Ice”.

From an original idea of Giulia Mancini, in collaboration with Daniela Mancini, Danilo Mancini, Giuseppe Sorcinelli and Beatrice Dalle Rive